Vodafone - Staring into the Abyss

I have come to the conclusion that Vodafone will be roadkill on the path to ubiquitous connectivity. I’ve talked to several mobile operators in the past year and they all accept that they must become internet companies, they just don’t know how. This indecision will be fatal if Google decides to go global with Android and their spectrum purchases. Given my experiences as a simple punter in the past two weeks, can I beseech Google to buy the Three network off Hutchison Whampoa and show this relic of the 20th century what execution is all about? 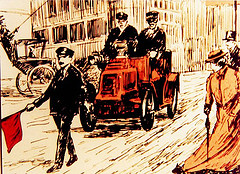 My experience with Voda recently involved them conning me out of money on the one hand and refusing to take my money on the other. It is truly a company that hasn’t the vaguest clue what its customers want.

In November I realised they were gouging me for a 15MB data plan at €8 when they also offered a 500MB data plan for the same money. I cancelled one and ordered the other. As they cannot help themselves when it comes to screwing customers, they did the cancellation immediately but did not enable the new plan until Dec 15th. I then received a bill for €289 which was mainly data charges.

It appears I’m not the only one who has been snared by this since a short conversation (with lots of time on hold) to customer service got me a full refund with no acceptance of guilt on their part and dire warnings to use Vodafone Live as my access point or it would happen again.

Which brings us to the second part of this sad tale where we move from ripping the customer off to just good old fashioned incompetence and misleading advertising.

So I’m signed up for 500MB “Mobile Internet”. None of the text or links on the entire purchase flow indicate ANY special terms and conditions on this plan. Silly me, it appears that as long as Voda have some Ts and Cs buried on a page somewhere on their site, they can get away with false advertising.

This “Mobile Internet” is nothing of the sort. It is some 20th Century walled-garden bullcrap with an internet makeover. From what I can gather on Jaiku, they insist on “Live” being used as the access point because they have no ability to meter on “Voda ISP”. That’s just laughable.

I tried using this joke of an access point on Thursday. My results using the phone browser:

Vodafone Live is not an internet connection, it is a bastardized hamstrung http proxy and the Advertising Standards Authority should come down on them like a ton of bricks.

But it gets even more ridiculous than that. I rang Voda to ask how I make use of the HSDPA 3.5G feature on my brand-spanking new N95-8GB (which I bought from them). I wanted to get their “broadband” package for it so I’d have 5GB for €14.99/€29.99 a month. The reply? They cannot provide this service!!!!! If I sign up for “broadband”, it is an entirely separate account for one of the sperm modems with a separate SIM. “Well you could put the new SIM in the N95, but of course then you can’t receive voice calls”. Well actually I could if you let me use VOIP on it, but you don’t.

I think I know what is going on here. Separate business units run “mobile internet” and “broadband” and they cannot figure out how to integrate the billing and/or metering. In other words they are a deeply dysfunctional organisation in terminal decline that sells devices it isn’t even capable of supporting.

To add insult to injury, I discovered that the Vodafone Live access point does work at 3.5G. It’s a pity none of the sites or applications that I use every day are actually accessible on it.

So here is my offer to Vodafone - I want to give you €29.99 a month. I want to use HSDPA on my phone. I want to use my phone as a modem for my laptop. I want access to every single site on the internet (no that doesn’t just mean the web) and I want no limitations on ports, protocols or payload. Wake up, smell the coffee and take my money in a honest transparent way. If you cannot figure out how to provide me with this, you’ll be a footnote in history like blacksmiths when the Model T took over.