This first generation Google Android phone is an interesting mish-mash of brilliant software and so-so hardware. The touch screen is fantastic and the UI is almost perfect. Whilst it can’t compete with the N95-8GB on multimedia capabilities, for our business it kicks its ass.

The G1 is not available in Ireland and may never be. So far it has been released in the USA and the UK. Calls to CPW in Enniskillen drew a blank as they had no idea what I was talking about. So I bit the bullet and paid full whack for an unlocked phone on eBay. The vendor in San Francisco shipped it the day before Thanksgiving and it arrived on the Monday. I was very impressed (and relieved). I immediately replaced the 1GB microSD card with a 4GB one. 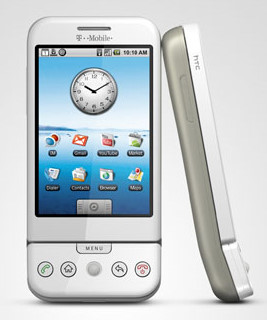 First impressions of the hardware are not great. The screen looks good, the buttons cheap, the kink at the bottom weird, the full qwerty keyboard better than expected, the scroll-ball surprisingly usable , the lack of a standard audio jack bizarre, the wobble between the upper and lower halves of the phone terribly annoying and the camera crap.

The phone can’t be used until it is activated with Google. This took me a while as the Irish mobile network APNs are obviously not known to the phone and it won’t activate over wifi. A bit of Googling got me the settings I needed (see last post). Then a big sigh of relief as I realised it fully supports Google Apps for Your Domain so I could register with my loudervoice.com address.

Then you see the UI and the software and the touch screen in action. You forget about the crappy build quality and the squeaking back cover because that UI totally rocks. Many compare it to the iPhone but I actually think it looks better. The single iPhone feature which I prefer is the “Back” as a button on the screen rather than a real button. The main thing about the Android UI if you are coming (like me) from a Symbian Series 60 phone, is speed. It screams along. The browser is amazingly fast, GMail is scorching, GCal is great, GMaps is instant. Compare this to the “wait wait wait” of an N95-8GB and you wonder how you put up with it for so long.

You may have noticed a theme above. Yes you have to live in the Google world for Android to make sense for you. In my case it’s a no-brainer. Apart from Zoho CRM, Netvibes and some technical online tools like Unfuddle, I spend most of my day on a variety of Google Apps. Between GMail, Google Reader, GTalk and Google Docs, that accounts for many many hours.

The phone doesn’t come with a huge number of other applications. All the basic things you expect are there. The Google Marketplace is their equivalent to the iPhone App Store. There are a few big differences. The first is that Google doesn’t try to compete with its own developers by blocking “competing” apps. As long as the app doesn’t kill the phone, it’ll probably be approved on the Marketplace. The downside of this is plenty of silly pointless apps so you need to use user ratings/reviews to guide you.

The second difference with Android is that you are not limited to the Marketplace. Sergey Brin doesn’t decide for you what apps you are allowed to run on your phone. You can install whatever you like. This is even more open than Nokia who have dropped the ball completely in 2008 with the app-signing fiasco.

Whilst it is early days for the Marketplace and pay-for apps won’t arrive for another month or two, there are a ton of fantastic ones built already. These are the apps (alphabetically) I have installed:

As you can see, lots of stuff after only a couple of months on the market. The quality can vary a lot and I still think there should be much stronger multimedia apps built-in. It’s one area that Nokia are getting better and better at.

What are the big ones we are missing? VOIP is number one. There is no proper VOIP app yet and no rumblings that one is coming. So no proper Skype, no Truphone, no Fring. Is this due to the Java-based development platform not providing the necessary API access to the network stack?

There are no video streaming apps yet either. I’m a huge fan of Qik and would love to see it on Android.

Lots of people mention the lack of multi-touch on the screen. It appears that basic hardware support is there but no software support yet. Looks like a neat idea but apart from zooming crappy pics on the iPhone, how else is that feature used?

The SMS handling also needs improving. It gives up too easily and doesn’t re-queue the messages like a Nokia.

Having lived with an N95-8GB for a year, how does the G1 compare?

I originally thought I’d drop the N95-8GB for the G1. Having used Palm IIIx, Tungsten-T and Nokia N770, I now consider a touch-screen mandatory on my main device. However, the superior multimedia and camera on the N95-8GB means I now carry both. The device to lose out is actually my laptop. Unless I know I need to edit Word documents or something else heavy duty, then I generally leave it behind. Of course, I did have to buy 2 spare batteries for the G1 to get me through the day!

Google doesn’t actually have to do a huge amount to get Android almost perfect. Add some more built-in apps particularly on the multimedia side, add VOIP, improve the “phoning” experience and enable Gears for all apps (particularly Maps). The better phones will come from the partners. The Lenovo oPhone looks amazing and addresses every hardware criticism I made above.

I said in my 2009 predictions that Android will be huge. I’m totally convinced of that. The profile of person moving to GMail has changed from early-adopters to people like my Dad. I’m pretty sure when people like him go for their next phone upgrade, the “with Google” and built-in GMail will be enough to move them from Nokia. I can’t be the only person who saw the N97 and thought “it looks amazing, pity it’s Symbian and therefore probably dog slow”.

Should you buy a G1? If you are based in the UK/USA and it is on a good deal, maybe. But most should wait for the G2 or the wide range of other manufacturers' phones that will have Android in Q2-Q4. HTC, Motorola, Sony Ericsson, Lenovo and others will all have phones in the coming months.

In the meantime, keep your eyes peeled for more stuff on Android right here.